I write this article as I’m sat on a train, wedged between a window and a man whose arse takes up one and a half seats, who seems to enjoy as his only form of sustenance cheese and onion crisps. It is the only smell spare his potent sweat that I can currently smell, burning in my nostrils as I struggle to breath. This is when the thought of train etiquette sprung into my head, it seems to be this unwritten code of conduct that travellers and commuters alike adhere to, for the most part. I drew up a list of rules that should be followed to insure an undisturbed journey. I write it in full view of this man, who has just plugged in his IPod, listening to what I presume is Harry Potter as I can hear Stephen Fry whispering sweet prose into his ear. On a side note, I am fully aware I sound like a grumpy old man but my Britishness of not saying anything in public but writing complaining letters is winning through.

1. Smelly foods are a definite no no, people don’t want to smell your questionable in date yogurts or pickled eggs. There is a group on Facebook that supports this called ‘Anti smelly foods (especially prawn flavoured crisps) on public transport’ . We as British people eat an average of £229 a year on food consumed in transit, the highest in Europe. This really shows on trains with people quaffing pungent smelling Greggs or inevitably spilling some drink that upon contact instantly turns into superglue on the seat that I have reserved.

2. Children, anyone praying for peace, it’s their worse nightmare. I once sat on a 40 minute train counting how many times this 5 year old ran past my 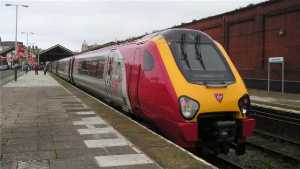 seat, by the time I got off the tally was up to 43 with many swear words etched around the page. Further down the age spectrum are babies; I love babies in any other social situation they make my ovaries tingle but not on a train. Somehow when put on public transport they call upon a scream that puts a banshee to shame and their mothers read Hello Magazine ignorant to the mass disturbance that their spawns are creating.

3. The mobile phone revolution has been a massive leap forward in communication, with the vast majority of Britain owning a mobile and I am fully aware that at some point during the journey you will need to call a loved one and let them know you are on the train safe and/or inform them on your impending arrival. However, for the love of all that is holy we do not need to hear about how much banter was had last night or if Kelly really got off with Liam. Another type of phone call that really exasperates me has to be the arrogant business man, who always seems to have an exceedingly loud ringtone, that never seems to cease ringing twinned with his exceedingly loud voice.

4. Public displays of affection are a rare occurrence but never the less equally as annoying. On a train to Cardiff recently as I was about to get off the train two policemen pushed past me onto the train and started to bang on the toilet door, being the nosey man I am I stayed to see what had happened. They forced the door open after knocking for sometime, this revealed a half naked woman desperately trying to cover up her ‘dignity’ and a very red face but obviously very proud man. This incident meant that the train was delayed by half and hour, not a bother to me but for everyone else on the train a nuisance.

5. Definitely the most common irritation to people is the sleeping passenger. 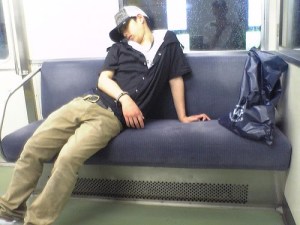 A past time I must confess I readily enjoy, at the end of this term I took a 6am train from Durham and slept for the majority of the 4 hours waking only momentarily in a panic I had missed my stop. However you should not sleep on a train if you are; a snorer, a dribbler, a sleep snuggler, shoulder rester or worst of all a sleep talker because no one wants to have someone next to them shouting “The red coats are coming, the red coats are coming!”

6. Finally my pet hate, stinking feet. If your feet smell like damp stilton, keep your feet in your shoes, we all shouldn’t have to suffer because you have an inability to shower.