So this week I earned an Olympic medal…

Ok, that is a slight embellishment of the truth but I got your attention right? In actual fact I just took part in another of my 10Ks, this one’s route circumnavigated the Olympic Park in London. The part of this race 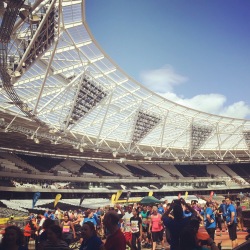 that made the heat and the seemingly endless rises with no falls worth enduring was finishing the race inside the Olympic Stadium. As a Brit, it was the stage on which so many incredible moments of pride in sport and our country as a whole occurred in 2012. These moments were played over loudspeaker as we ran underneath the stadium, sending shivers down my spine and goosebumps up my arms.  The rest of the running was a blur, but the moment that I ran around the Olympic Stadium will stay with me till I’m older and greyer.

At this race I was lucky enough to have some brilliant cheerleaders (complete with motivational t-shirts) to help me get across the finish line but a question that I was asked was why do I run?

It’s an interesting question and for the most part I think that people run for two simple reasons; to run from or to something. They run to a new body, from an unhappy state of mind, to a personal best or from the neighbour’s dog that has a penchant for human meat. Personally I run as a form of therapy, simply put; I run to think. In those serene moments between, “dear lord my legs feel like lead and jelly at the same time” and “what only 6K in?!” I get my best thinking done. Haruki Murakami’s amazing book ‘What I talk about when I talk about running” has a quote that lends itself to why I run:

“I just run. I run in a void. Or maybe I should put it the other way: I run in order to acquire a void.”

Within this void I can allow my mind to breath in and brood; to seek clarity. I think of my past and I run from it and I think of my future and I run to that. The present is mostly filled with sweat patches and self-consciousness so when I run I close the world into my little void. They are never hugely profound thoughts that occur when shoe meets concrete over and over but I always feel better because of them. The world around us is so extraordinarily loud and unrelenting that we rarely get moments just to focus on what is truly important; you. That is why I love to run, we can just put one foot in front of the other until the crazy world that orbits us makes a little more sense, or to put it another way until the black and white world begins to colour in.

James Bay – Get out while you can

12 thoughts on “Running with Goosebumps – Why I Run”