Before I left for the Rome Marathon I watched a documentary called Spirit of the Marathon 2 which is about the Rome Marathon from the prospective of a few runners. In a short scene it showed two local runners in a park surrounded by ruins and sunshine. I knew then that when I got to Rome I would run there, only problem was I had no idea where it was.

I didn’t really research it till I arrived in Rome and after a few minutes of arriving in the Airbnb I began the search. After a while I was convinced I had found it and headed off for a walk that would hopefully end up at the marathon expo to pick up my bib for the race a few days later. After long walk, a metro and another long walk we arrived in a park. Not THE park just A park. After about two hours of walking through this park I admitted defeat conceded that we were in the wrong place and got an uber to the expo.

It wasn’t till I got back after the marathon, still drip drying from the thunderstorms that I fired up Google Earth. As soon as I dragged over to a park a road over from the one we had spent two hours wandering around that I saw it clear as day. Not the ruins but their shadows. 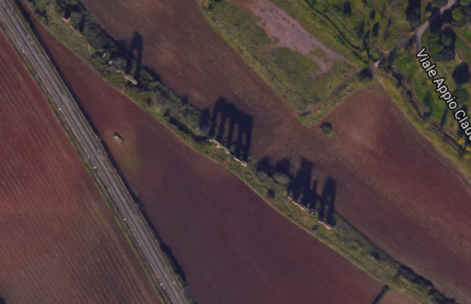 So, two days after the marathon I laced up my shoes once more and headed back out in search of this mythological park. The walk from the exit of the metro (Giulio Agricola) to the park (Parco degli Acquedotti) was only a few minutes and as soon as we turned into the park I knew I hadn’t messed up again and it was well worth the wait.

We only ran a mile or so, stopping to walk often as I was struggling after the marathon but it will remain one of the best runs of my life. The place was bathed in sun light, spectacularly well maintained and oh so beautiful. The ruins of the aqueduct were just as I had hoped and for those few minutes before we had to go get our plane I felt truly timeless.

Lord Huron – The Night We Met

3 thoughts on “A Roman Running Secret”