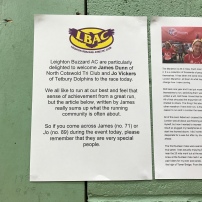 On April 23rd I said goodbye to two complete strangers with tears in my eyes.  We had spent the last hour or two, arm in arm staggering towards the finish of the London Marathon (I won’t repeat the whole story but you can read it all here). Fuelled by the crowds and camaraderie we reached the finish, handed Mark off to the paramedics and shortly afterwards Jo and I went our separate ways too. If I’m honest, I didn’t think I would see them again after that but runners are a strong community.

Shortly after I published my blog post about our experiences I received an invite from Mark’s running club, Leighton Buzzard Athletic Club (LBAC), to join them during their annual 10 mile race. Naturally I said yes.

I arrived, bleary eyed after the early wake up to get to the race in time and stumbled towards the race HQ to pick up my bib. I was swiftly woken up by Kate, who greeted me warmly and gave me my bib with a lovely note attached; “Give this guy a mahoosive thank you for helping Mark at the London Marathon. A true sportsman”. This would begin a morning of shout outs.

I have always said to anyone that if you want to feel like a celebrity run a marathon but if you really want to feel like a star help someone at one and then run at their running club. I was running somewhere I have never been to before and yet I experienced an unending stream of “you’re a hero”, “go James” and high fives from start to finish.

The Leighton 10 itself was a fantastic race that I would throughly recommend, it’s a hilly course but a great try out for people about to make the leap into half marathons. I think it wins the award for the best marshalled race I have ever done, with constant guidance and support from the LBAC members who had foregone their own race to make sure all of us out-of-towners got around ok.

While I hope that you fellow runners would help anyone out without the promise of reward but just remember that no good deed goes unrewarded in a community that relies upon one another. As I said back in April; running comes down to being your personal best not personal best times. Because of one small act of kindness during a race I now have two friends for life and found a wonderful community of runners at LBAC, which now feels like my second running club. That will always trump any short lived beaten goal, remember that.