With almost 3,000 feet of elevation gain, very challenging terrain and being exposed to all the elements of wet and windy Wales the Snowdonia Marathon is regularly called the toughest marathon in the UK. Regardless, I chose this race as my tenth marathon. Why? Because despite all the reasons I shouldn’t have done it I couldn’t imagine doing any other race to celebrate this milestone.

Snowdonia National Park is one of my favourite places on the planet; it is home to a lot of my family and where I spent many holidays. It is full of stunning vistas, awe inspiring mountains and where, if I’m honest, I can feel contently calm. The route would pass by lakes I had spent hours skimming stones on, pubs where many shared laughs had echoed, paths my growing footsteps has trodden and family I love beyond all comprehension. So when I realised that this marathon existed and it would fall at the perfect time to be my tenth marathon I knew that despite the pain it would no doubt induce I couldn’t not. And as I lined up at the start with Mark, who I had helped during London earlier this year, I felt that my decision was poetically perfect.

The race starts with a slow steady incline followed by a huge relentless incline, false summit follows false summit. After the five mile  climb out of Llanberis to the 1,100 foot high Pen y Pen pass, I quickly understood why this race sells out in hours despite it’s cruelty. I spent most of those five miles (and a lot of the proceeding miles) chatting to runners who were enjoying themselves. Sure we were struggling but it felt like we were all willing the other along and as I reached the top a few of us high fived before starting the steep decent that put new life into our tired lungs. 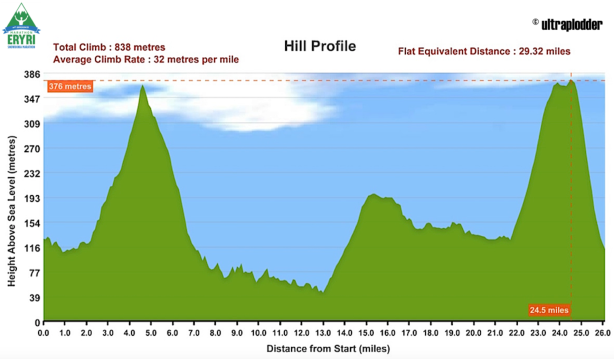 Once down the steepest part of the decent at mile 6 the terrain abruptly shifts from smooth road to a rough pathway and my flying feet were forced to be more cautious. Despite that my pace was still way faster than previous marathons, a minute per mile at points. I feared that this would come back to bite me later on in the race but as I past through Beddgelert and the halfway mark I clocked my fourth fastest half marathon time ever and that was during a marathon!

Then as you move out of the beautiful Welsh town the slow, steady, torturous climb begins. While this part is not the steepest by a long way I found this part the hardest because it seemed never-ending. Having driven on this road so many times I had never realised that for 3 miles there is a constant climb upwards but when you are powered by nothing but your muscles and gels you soon learn it’s crippling continuation. Luckily at Rhyd Ddu I knew I would have back up. Through out the race, thanks to the roads being opened my supporters, who had travelled the four hours to cheer me on and enjoy the beauty of North Wales, could see me at numerous points. My aunt and uncle live at Rhyd Ddu so as I dipped into their driveway and met my crew having cups of tea I took on gels, cheers and lumbered on. However, as I began to run again after that I felt my muscles tiring, the stop has reminded my body how lovely being inanimate felt and getting going again was proving hard. The next few miles were a combination of running and walking as I tried desperately to find that sweet-spot I had been running in before. By mile 20 I had rediscovered it but knew that I had the biggest challenge still ahead. As if the race wasn’t special enough at mile 21.5 I ran past my grandmother’s house and waved at her through the window as she cheerfully watched on. I changed my rain soaked clothes, swallowed my last gel and said goodbye to my crew that I wouldn’t see again till the finish line. The mountain called.

I knew that this race would test my grit and endurance, that when I reached mile 22 and the steepest climb begins if I didn’t have the determination to simply persevere I would crumble against the challenge. The climb began and I knew I would have to walk it as my body simply couldn’t run up that incline. As I soon realised I wasn’t alone, everyone around me was doing the same, so we chatted, struggling to catch our breaths as we stumbled into the clouds. As the climb came to a close I was dealt my final challenge and one I hadn’t accounted for at all, the decent. It wasn’t the steepness of it, although that has caused me to take the stairs on my bum on numerous occasions since, but rather the terrain. I am not a fell runner and this was fell running territory; slippy mud, wet grass and jagged rocks jutting out at awkward angles limited my speed as every step needed to be calculated to avoid ending up on my arse. I was wearing road shoes, which were definitely not equipped to deal with the terrain I was now facing. I watched as many ahead of me wearing similar shoes skidded and others slipped to the ground in a mud covered mess. I feared injury but craved getting a sub five hour finishing time so stumbled at controlled speeds towards the eventual tarmac terrain at the last half mile. I pushed my body to go as fast as possible without turning into a human snowball, hurtling downhill collecting other runners as I rolled onwards. I told myself that when I turned into the final stretch I would sprint harder than I ever have and finish with a leap in to the air. However, when I turned that corner a hot flash burned through me as my calf muscles spasmed with cramp. My finish was less of a sprint and leap more of a swear and lurch but with a tear rolling down I finished my tenth marathon as the clock ticked past the five hour mark.

Running has taught me so many things but the Snowdonia Marathon has rather reminded me of a fact I had begun to take for granted; without my friends and family all this running wouldn’t feel half as special as it does. So thank you to them for supporting and thank you to you, my readers, for sharing this adventure with me.

REVIEW
Highlights: This is by far the most beautiful marathon I’ve ever done. The hard course gives you a real feeling of achievement. Being a smaller marathon I suspected I would miss the support but the other runners made up for it and because it was an open road race but with careful planning to reduce traffic issues it meant that I saw my supporters 7 times during the race!!

Lowlights: While the aid stations were brilliant I did have a slight worry that if anything did go wrong there wasn’t a huge amount of marshalling along the course.