Distract your brain and your body will get it done I kept thinking. But as the hail pelted against my waterproof I could struggle to think of little else but the horrible here and now. Then I remembered the post-it note.

About a week before the race I was having one of my many sleepless nights and in a failed attempt to ease my scattered and fragmented mind I wrote my aims for this race down. They ranged from “don’t throw up” to “just fucking finish” and everything in between. One of those aims was to just think about how lucky I am, so I thought about all that I have to be thankful for, whatever joyful memory I could use to deflect the dread. I thought through a lot of moments from this already amazing year and soon enough I could feel my heartbeat slowing. I’ve never had a true panic attack before but I imagine what I had in those menacing moments was a kin to that feeling. Powerfully powerless I trudged on.

The climb took over 30 minutes but it felt like eons, a timeless unending torture. As we reached the top the weather broke and the sun mockingly returned so we began to run once more and I left those feelings at the top of the climb never looking back.

It was clear that everyone’s moods had been lifted by conquering our first real challenge of the race. We all chatted mindlessly and exchanged shortened life stories to pass the time and before we knew it the stunning Haweswater Reservoir came in to view, signally that our next checkpoint wasn’t far away. After another fistful of food at the checkpoint we began the next colossal climb. Again, seemingly to order, the weather closed in around us. The rain was bad but the cold bitting wind was far worse this time. My hands quickly became numb and I could feel my body temperature crashing. While the logical side of my brain told me to stop and get some extra layers out of my bag I pushed on. Steve was struggling behind me, his stomach causing him a lot of pain, while I knew I would wait for him at the top I had to push on. I got through this section doing something I had never tried before; loudly swearing into the wind. No one would hear through the battering gale and their own battles so I took out my mental swear dictionary and went from A to Z.

Once at the top Steve and I regrouped and tried our best to run the next incredibly technical down hill section. Steve’s rebelling stomach was making running more and more of an impossibility and while we tried our best to ease the pain there was no controlling it. Steve said that if I wanted to go at my own pace and leave him behind he wouldn’t mind. There was no choice to be made, we were going to finish together. It is funny how quickly a stranger becomes a friend when you are thrust into an improbable settings together. Steve and I were a team now which was a bond we both needed to get us to the finish line. 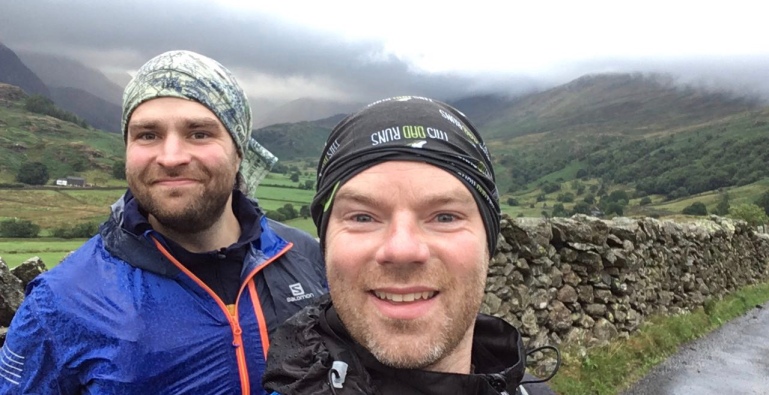 As we passed through the next checkpoint and into the darkening skies both our minds turned to how we would cope in the night. We always made sure we could see someone behind and someone in front, insuring that we were still on the right track. If there was any worry or doubt we would run to catch up with the runners ahead and stay with them until the road became clearer.

As night truly fell, we arrived at Ambelside which was the 40 mile mark and a welcome checkpoint. By now I realised that the socks I had on were soaked through and to avoid trench foot they needed changing. It was at this checkpoint I broke one of my race vows and I sat down. The plastic, lumpy, wobbly chair was pure perfection and with a coffee in hand I simply stared off into the distance for a good couple of minutes. Then I ‘sprung’ or more likely moved at a sloth like pace into action. I took off my socks and apprehensively surveyed the damage. Apart from a nasty looking blood filled blister on my big toe and my very white and wrinkled feet (imagine what your fingers look like after being in the bath too long across the whole of my foot) everything looked surprisingly ok.

We left the checkpoint feeling like new men. Wether it was the sit down, the new socks or the pain killers we both swallowed like m&ms we were smiling again for the first time in many, many miles. As we ventured back out into the now clear night sky we picked up a new member to our team; Darren. He had lost his maps and was feeling somewhat defeated saying that he feared he’d would only slow us down but we insisted he join us. He admitted at the end of the race that if he hadn’t joined up with us then he wouldn’t have finished but honestly his company made the race even more enjoyable. His inspiration story and the comradery we all shared kept us going for the next 10 miles.

Soon after we left the checkpoint we once again began a slow climb up. We had been joking about how the night might play tricks on our sleep deprived minds so when we saw an odd figure ahead I instantly assumed it had begun. I shouted at the slumped figure to identify themselves. As we sheepishly approached we realised that we weren’t hallucinating, it was one of the runners whose race had come to an end. We pleaded for him to join us and that we would help him get to the end but he couldn’t move through tiredness and fear of fainting. We had no choice but to leave him with a promise that he would slowly make his way back to the checkpoint and get the help he desperately needed.

The next section was a blur as we could focus only on what our head torched illuminated, narrowing memories to gates and footprints. At the unmanned checkpoint we were warned that the weather was turning trechoruous and that we needed to hurry up. Not something you want to hear when your body is spent and you still have many miles left to go. But we pressed on and reached the final checkpoint signalling the beginning of the end, only 3.5 miles left. Surely that would be gone in a blur of excitement I thought. I was so very wrong. By then the sun had started to rise and with it the wrath of the weather returned once again, pelting us with the full force of mother nature. Regardless, we left the checkpoint, again with biscuits in hand, and headed up hill for the last time.

The climb seemed endless and as we trudged through the deepening mist I feared we had made a wrong turn. Every summit revealed another climb, over and over again. Until finally we saw the large downhill section that we knew led to the finish line.

Steve and I had vowed at mile 10 that we would never do another race like this and yet as we staggered our way to the finish line I felt a longing for another such adventure. The 19 hours and 50 minutes it took us to get to the finish had been filled with raw emotions; pain, fear but a lot of joy. We had shared a lot of laughs as we put the world to rights and supported each other when our days got dark.

The sense of achievement and the swell of emotions as we were cheered in to collect our medals is unlike anything I have ever felt. I had once again made the seemingly impossible, possible. We hugged and quickly departed to our beds as it was now 7 in the morning and our bodies craved the comfort of sleep.

I crawled into bed, still half dressed in my running gear, and slept deeply for a few hours. Waking I had to wonder; had I dreamt all that? When I looked down at my mud covered body, wind buffeted face and battered feet I knew that it was very real. The smell of my body confirmed it further.

I pulled the medal off the bedside table and just stared at it, a whole new chapter of my life has just begun. This was just the starting sentence as I prepare to complete the Marathon des Sables next year. My next impossible is now so much closer.

If my damp, tiring but life-affirming experience should teach you anything it should be to not write and rewrite the same chapter of your life over and over again. Begin a new chapter. If you have a goal, go chase it. Make that which was once impossible, possible.

5 thoughts on “GOING THE DISTANCE – MY FIRST ULTRAMARATHON (PT 2)”