The day before Snowdonia Marathon I woke up in a hotel in Athens almost 4,000kms away from the start line. 14 hours of travelling and five different modes of transport later we arrived at the expo, five minutes before it closed.

A good night’s sleep and an unhealthy amount of porridge later I was on the start line of the race, shivering in the freezing but stunning conditions of a perfect Welsh morning. We had been gifted rare conditions for a race known for three things; inescapable rain, piercing winds and evil elevation.

The start of the marathon is a test of self-restraint, one that I passed far better before. Last year, during the relentless uphill struggle to the top of Llanberis Pass at 1,100ft I kept a steady pace. This time, because I was due to run New York City Marathon only eight days after this race I slowed right down to a brisk walk. Sensible decision you might say, but what goes up must come down and that’s where I went rogue.

My uncle, partner and friend decided, after the fun of last year, that they would cycle the course so I had constant support with them stopping at various points along the course. Once I had lumbered by, they would grab their bikes and speed past me shouting support as they went. The first time I saw them was at the top of the pass and the surge of joy it gave me twinned with the long, sweeping downhill led me to record the fastest mile I’ve ever done in a marathon by almost two minutes.

The sharp downhill leads into one of the two off-road section but because of the amount of trail running I’d done this year my footing was far more confident and constant then last time. Overtaking so many runners who were sensibly taking it cautiously inflated my ego, obscuring my view of New York just around the metaphorical corner. I went so much faster then I had predicted that my support crew missed me at the next agreed rendezvous at mile eight.

It wasn’t until mile 11 that common-sense returned with hilarious vengeance. I had stopped at the water station but because I was still speeding along I wasn’t really focussing on what my body was doing and ended up choking on the water. It surged back up again and the poor marshal, who thought I was throwing up, pulled me to one side. After I had embarrassingly admitted that I wasn’t capable of drinking properly I began to run again with a practical pace and rational thinking.

Just before mile 22 I stopped, not because my body had come to a halt or my mind had crumpled against the might of the wall but because I wanted to say hi to my Nain (welsh for Granny). She is a legend of a woman but at 97 sitting out in the freezing cold waiting for me to swing through was not an option. As she lives on the actual route of the marathon I stopped my race and popped in for a quick hello and a slurp of tea.

Leaving the warmth of her house was not easy, especially as just around the corner is the hardest part of the entire race. Last year the slog up the last hill was torturous, my legs were completely dead and the fog surrounded us blanketing any of the well-earned views. This year was completely different, the beautiful Welsh coast behind was bathed in golden sunlight and the snow kissed mountains of Snowdonia beckoned us forward to the finish. My legs, however, felt exactly as they did last year and the long slog felt just that; long.

The downhill that is earned following the trudge up hill is an early Halloween trick. You are so excited to be hurtling towards the finish line that it takes a while to remember you are on the second section of the race that is off road and I watched as a few runners ahead slipped and fell. I slowed to a dainty canter and veered off the well-trodden route that had been churned up by the hundreds of runners ahead.

After the steep off road, you rejoin traction friendly tarmac for the final stretch. While I knew I should be saving my body for New York I am a sucker for a sprint finish. I lengthened my tired stride and pushed myself forward, even attempting a finish line leap that felt epic in my head but looked more like a drunken stumble.

Running the Snowdonia Marathon a second time has cemented it as my favourite race. Sure, I may be bias because of the support and the deep emotion connection I have with the land beneath my feet but if you’d talked to any other runner at the finish line they would have agree that you’d be hard pressed to find a more beautiful marathon. 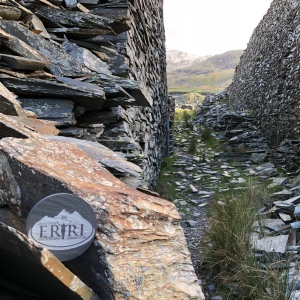