This post is over two months late. Hurtwood 50K was held in early December and while it has been on the top of my blogging ‘To Do’ pile, I have dodged writing it up because it was the hardest race I have taken part in to date. Not because of the distance, terrain or bad race decisions. It is simply because I did not want to be running it.

In the weeks leading up to the race I had been worn down, both physically and mentally. The passing of my grandmother, Nain, a week before the race weighed upon me heavier than I had anticipated. While she was 97 and she had the perfect death, surrounded by family and at peace in her own home, the grief had taken its toll on me. I felt the shadowed squatter crawl through my weakened resilience and my depression returned. This was twinned with a step up in my training for Marathon des Sables, which had tired me out, and even on the start line my legs felt like lead weights. I had booked this race in simply as a training run and because I was thinking in that way, I failed to respect it.

It was a race that I was not prepared mentally for. I’d not built up defences; so, when the onslaught of pain and exhaustion hit, my hardened core laid was made derelict by tears and tiredness. I was doomed to struggle from the start and knowing that made the starting even harder.

We arrived with little time to spare and as I readied myself for the start, I snapped angrily at my partner who was simply trying to be helpful. I never snap and as soon as it came out my mouth I knew full well that I wasn’t myself, by her look of surprise she realised it too. I knew painfully well then that today’s race was going to be more of a mental battle than a physical one. 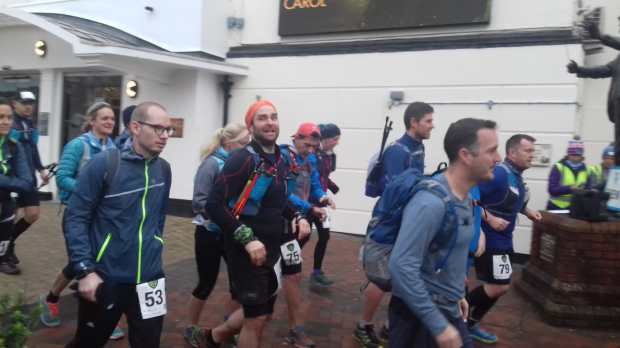 The Hurtwood 50K is laid out in a simple route; roughly 12 miles followed by a 6 mile loop and then the same 12 miles back across the stunning Surrey Hills.

I am a newbie to ultrarunning and because of that I have no real tactics or plan for the race. My plan is simple; get to the finish line. Unlike all other race distances, I don’t care about time or pace. My Garmin is only used to show how many miles I have done and how many hours of daylight I have left. By removing that focus it allows my mind to drift and in those early miles I was quickly alone with only my thoughts. Within that quiet place I found a true sense of calm where there had been only anxious storms before. I often liken running to therapy, but some of the miles when the route lay unfurled before me, and no one else was around, felt like meditation in motion. No deep revelations were had, or any wounds healed, simply moments of pure calm. Silent sweaty serenity.

I would be quickly ejected from that serenity when a hill or other runner would come past. Those jarring returns to earth reminded me that I wasn’t actually running anymore but walking. I was losing the mental battle because I was simply trying to ignore what was going on. I would try to run and my mind would simply shut my body down. It felt like constricting vines upon my legs, tightening with no warning, and almost felling me on the spot. I ran when I could and walked more often than not until two friendly faces came into view.

My reinforcements had been waiting at around mile 12 in the form of my partner and a friend. They would join me on the 6 mile loop and then head to the finish line after that. Their company was a huge relief but it did little to elevate my attitude which was at rock bottom. We would run and walk at my pace and although it did a lot to push me along, as soon as they were gone, I felt the loneliness sharp upon my skin.

During the miles until the next checkpoint I was probably at my lowest ebb. I had 10 more miles to go and wanted to just be done. I wanted to sit down and stop. I knew I couldn’t, so staggered on slower than ever.

The mud proved a real hinderance to any sort of steady pace as the fear of slipping on my arse meant that I halted to a slow walk at every patch. As sensible as it was it certainly caused some toe pain as I shifted awkwardly on the route to avoid puddles and sludge. This became more prevalent as darkness closed in around us.

At the next checkpoint, just as day became night, I was gifted more support through a few fellow Instagrammers. Say what you like about social media but without these amazing people I think I would still be out there on the Surrey Hills. We were essentially complete strangers, bar a few likes and comments, and yet we felt an instant kinship and ran together from then onwards. After a while we chatted infrequently but through the silence of strangers the support spoke volumes and it really helped me keep going. A band of brothers and sisters, simply trying to get home and get out of the mud.

My headtorch was less than useless at this point; the batteries were beginning to die and the beam of light that the torch created was aimed at the horizon in one long beam rather than illuminating everything ahead. This meant that my paranoia filled, sleep deprived mind kept imagining that the next step would be my last, that I would put my foot in a massive hole and snap goes my ankle.

The ultrarunner’s insanity had definitely kicked in in the final few miles. We spent about three minutes singing to a street light as it was our first sign of civilisation and perhaps a beacon that the race was almost over. The joy was short lived when we realised that we still had more miles left to run, so still we trudged on.

When the muddy trail became road and then the road became familiar, we began to run again realising that now we were finally at the end of a brutal, brutal day. Finishing hand in hand with other runners was a fitting end to a race where I relied so heavily on the strength of others to get it done. We hugged each other fondly (picture above from the race video) and went our separate ways, joined together in a shared adventure.

The Hurtwood 50K reflected the worse in me, the grumpy, self-loathing and self-doubting version of myself bubbled to the surface effortlessly felling myself defined strength. When I got home the accomplishment of completing my second ever ultra felt somewhat hollow. I know now that it was because I had my eyes fixed too far ahead, at the Marathon des Sables. It is why I ultimately struggled at my next ultramarathon, last weekend, the write up of which I promise won’t be two months away.

Ultras are savage, beautiful and relentless. They are as much a mental challenge as they are a physical one. They will shine a light on the cracks you have within yourself and beg you to break. But battling through all that is put before you takes true strength, you may not see it at that moment like I did but trust me, it is there.

I AM INCREDIBLY PROUD TO HAVE BEEN SHORTLISTED FOR THE RUNNING AWARDS BEST PERSONAL BLOG FOR A SECOND YEAR IN A ROW. IF YOU COULD VOTE FOR THIS BLOG THAT WOULD MEAN THE WORLD TO ME BUT GO AND VOTE REGARDLESS AS IT IS AN AMAZING WAY OF RECOGNISING BRANDS, EVENTS AND INDIVIDUALS IN THE RUNNING COMMUNITY.