Try not to panic but there are only 75 days left until the London Marathon!

With the big day getting ever nearer I thought now would be a good time to check in again with The Morning Coffee Run Crew. Ever since I picked them to be part of this interview series on runners who are aiming to run their first ever marathon in London, we have chatted nonstop and I have been completely blown away by their dedication to running and their camaraderie for one another.

You can read the first part of this series on what it felt like when they found out they would be running London by following this link but now let’s hear how their training has been going. 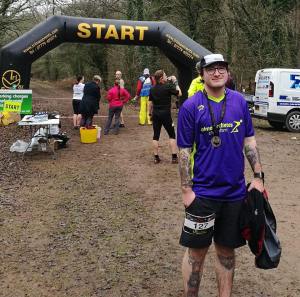 I’ve loved venturing into the unknown and going further than I’ve ever run regularly. I’m up to 16.5 miles and I’m quietly confident with the distance. It’s been hard getting out in the cold and dark but I’ve really enjoyed running with other people who are training for spring marathons, that helps my confidence and it’s been great having that common goal with people. I’m not following a specific plan because I know I won’t stick to one, so I kind of have in the back of my head that I should be doing more, but as long as I stay injury free I think it’ll be fine.

I think I’ve become more confident but also more humbled by my long runs and have begun to really understand the challenge I’ve taken on. I’ve got the marathon in my head all the time, so I’m being more sensible with my food and trying to lose as much weight as I sensibly can so I’m carrying as little extra weight as possible for my running. I’ve cut out junk and I’m trying to fuel myself properly, I think that’s been the biggest change with the most impact so far. I’ve also done more nature poos than I’d like to admit… 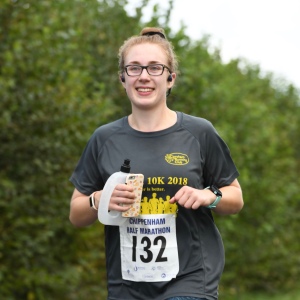 Training has been going okay. The first couple of months in the UK were great but moving to the alps changed that. Altitude training is hard but I definitely feel myself getting fitter so hopefully I’ll feel the effects when I get to London. I’m not getting as much running in as I’d hoped (I try to get out 3 times a week) but I’m skiing a lot so hopefully that’ll help me as well. I’m really enjoying my long runs at the moment simply because I’m in a beautiful location. I’m getting to use these runs to explore new villages and towns which is something I really enjoy. On the flip side I’m definitely hating the lack of flat ground around here. Every run has hills – and most of them are not friendly!

In terms of my mindset, I think I cycle between being really worried to really confident. Training at altitude is very hard work so I’m having far more “bad runs” than I’d like. But then every now and again I’ll have the most amazing run and I’ll feel really confident again. Because of this I’ve stopped training with a time goal in mind and I’m just running to enjoy it and hopefully finish the marathon in one piece.

I’ve realised that I don’t have the best training situation so it would be silly to put so much pressure on myself to run for a certain time. I’m running to enjoy myself and explore and then hopefully successfully complete a marathon in the end. I’m already looking for an autumn marathon so I can train properly for a time goal during the summer.

My training was halted at the beginning of December due to pesky shin splints but after a few weeks rest and a couple of visits to a physio I’m getting back into my training now. Currently my longest distance has been 13.1 miles and I’m feeling stronger and stronger each week. I’m realising that marathon training is like having a second full time job!

The most enjoyable part of my training has been discovering the huge, supportive running community, on Instagram, on Facebook, and also through the running club I’ve joined. It gets me out on a Monday or Thursday night and I definitely wouldn’t have pushed myself this much without them. I’ve developed more of a ‘can do’ attitude for sure! When I first received the ‘You’re in!’ Magazine I thought I’d bitten off more than I could chew as I was only running around 7 miles a week at that point. Now I’m running 13 miles in a single run! I feel more positive, focused and ready for this challenge. My new mindset has had a positive impact on my working and everyday life too.

The biggest change has been discovering a passion and focus for something I never thought I would. I’ve learnt to love running – even at 7am on a Sunday – and to enjoy pushing myself further than I ever thought was possible.

All the way up to Christmas I was pretty much on plan or at least getting out 4 times a week doing as much as I could and feeling good. Then I got ill and spent most of Christmas/New Year unable to speak and with a nasty chesty cough so couldn’t run. My mum sadly passed away just after new year also so mentally I was all over the place, travelling up and down the country sorting things and just not having much time or heart for training. I have lost a bit of fitness and it’s taken a month of grit to start to get it back, but it’s coming and I just have to roll with it. I have enjoyed knowing that I am improving, my body is getting stronger and I feel more in control of my life! I’m mixing up my training between miles, strength, Pilates and just general cardio exercise so I am a lot more active and aware of what I’m doing with my body. It’s also inspiring me to make some good life choices like going sober till marathon and improving my diet!

At first, I was intimidated by the training and totally lacked the self-belief that it would happen. Now I am at peace with ‘getting round no matter what’, be that walking bits, it taking 8 hours, etc. I am going for the experience, atmosphere and achievement – everyone who crosses that line gets the medal and right to say they did it. So, I will do it and enjoy it! 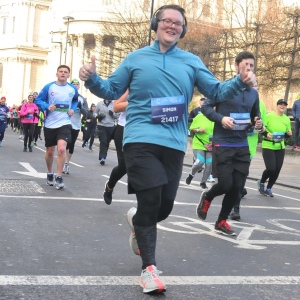 My training didn’t get off to the start I’d hoped for as I managed to fall ill and then got injured, meaning I wasn’t able to run for most of the last six weeks of 2018. After a few weeks rest I started my training plan on New Year’s Eve but just took the first two weeks a bit more cautiously, mainly running shorter distances and keeping the pace quite slow. In the last week or so things have started to pick up and it’s starting to feel quite real all of a sudden. I’m working with Team Project Run for my marathon plan and the coach Lloyd has added a real mix of sessions into the plan so far which I really like. I’ve also really enjoyed being part of the TPR group as there’s a real sense of community and support amongst all the runners.

I think I’ve become a bit more determined since I found out I was going to be running the marathon. Previously if I’d had a really long day at work my motivation to go out for a run after work wasn’t always there and I’d often skip sessions. So this time to be using a training plan and actually sticking to it is a big change and I can really see the difference. I also use a training journal now and write down how I felt at the end of my run. It’s a good way for me to process how I feel my training is going and track what I need to be doing in the week ahead.

If anyone saw how I got injured in December I think they’d get a laugh out of it. My gym has those treadmills where you can watch YouTube and I decided to watch a comedy while I was running to stop myself getting really bored. Whatever I was watching was obviously pretty funny because at one point I just lost concentration for a second and that was enough to send me flying backwards. 5 hours in A&E and a visit to the fracture clinic confirmed a hairline fracture and put me out of action over Christmas/New Year.

One thought on “THE MORNING COFFEE RUN CREW – 75 DAYS”