With the medal I had longed for finally around my neck I took myself away from the joyful hubbub and let the moment truly sink in. Standing alone for the first time since finishing my thoughts immediately turned to getting home and celebrating with my friends and family.

I had not used my phone to contact the outside world or used the email service provided by the race to reach out as I wanted this time in the desert to be a retreat from the outside world and the technology that defines it.

I tried in vain to call my partner but the signal in the middle of nowhere was unsurprisingly awful. It rang once, only to cut off. After countless tries the phone rang and I finally heard the voice of the person I’d thought so much about over the past 240km, my undying light at the end of a seemingly endless and sand riddled tunnel. We both cried simply from hear one another’s voices and I knew that all was right with the world again. I also spoke to my parents, it doesn’t matter how old I get, hearing them say they are proud of me will always bring a tear to my eye.

I made my way to the tent and was met by the opposite of the day before; a tent full of  ecstatic runners. We hugged, cried and congratulated one another, we had achieved the impossible and finished a race that only a few had conquered. 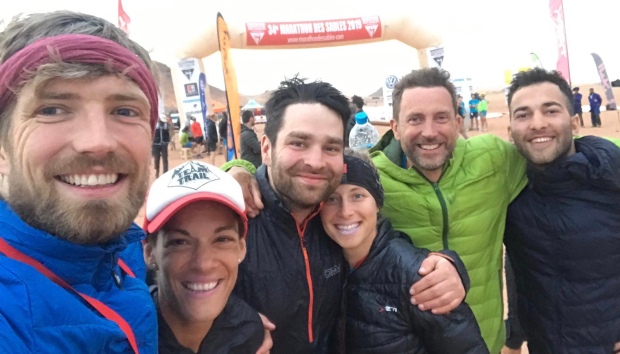 James was the only one missing from our tent. He would finish almost last, supported the whole way by Charly, who’s ending support extended to another James, on another day. We would stand at the finish line right until the final runner who crossed the line as the light of the final day in the desert darkened the golden sand. He was welcomed by a cacophony of cheers from most of the other runners who had hobbled out of their tents to welcome him in.

That evening was a weird mix of private celebrations in every tent, podium announcements and endlessly dull speeches. As Gemma went up to collect her third place trophy we whooped and hollered like wild animals, in part because we were proud of what she achieved but also because we knew it would embarrass her.

A strange set of emotions washed over the tent as we prepared for our final night in the desert. Sadness that the adventure was over and the real world beckoned us back to emails, rent and responsibly. But that was juxtaposed with unbridled joy at returning home to loved ones with one hell of a story to tell, new friends and monumental memories. A large part of me never wanted to leave the desert while the rest of me craved a bloody shower and a private loo.

I woke exceptionally early and just lay in my sleeping bag looking out at the desert that truly now felt like home.

The final stage of the race was a 6km walk to the finish line. It is a charity stage and untimed and if I’m honest it feels like a massive anti climax as it’s really just the walk to the buses. Because it was a walk it did allow me to spend some time with Gemma and Jodie, who achieved an utterly remarkable 8th place finish, for the first time mid-race.

We crossed the final finish line and suddenly and rather unceremoniously the Marathon des Sables was over. We were bundled on board our two hour long transport to the hotel and the desert was left in the rear-view mirror.

We would spend the next two days in a luxurious hotel, which felt painfully jarring to me mentally. The sudden culture shock of going from desert hovel to decadent hotel left me with emotional whiplash.  The first night I slept very little, far worse than any night in the desert. The overly comfortable bed twinned with my conflicted mental state robbed my tired mind of peace and rest.

Two nights and two flights later we landed back in Heathrow. Saying goodbye to Jodie, Grace and Jo at the airport was hard as we had spent almost every minute together when we weren’t racing and suddenly we were all going our separate ways. Mark came to stay at mine for another night which was perfect as I had someone else to help me tell all the stories but as we sat down to eat my mum’s lasagne, my favourite meal, the desert already felt like a distant memory.

Just like my footprints in the desert, blown to oblivion, normality quickly blew away the sand from my mind. The mundane slowly eradicated the magnificent and there are countless times, usually when I’m scrolling through emails, when I doubt I even completed the Marathon des Sables and it was all just some twisted dream. In these moments I scroll through the photos and now read these words tied together in tribute to this life changing race and remember it all:

Every mile, every dune, every mouthful of rehydrated chicken tikka, every painful moment and tear cried in despair.

Every laugh, every much needed hug, every sand storm, every sunset and sunrise.

All of it, always.